Band from Loures, their first formation dates back from 1990 and was composed by Carlos Pereira bass/ vocals, João Silva drums (both ex-Massive Roar). To them later join Ricardo Santos guitar. After six months of rehearsals, there was a need to have another guitarist, entered João Alves. With this line up the band composed the first songs. In late 1990 the repertoire was still scarce but ready to be presented to the public. Thus, on February 9th 1991, Lakrau played for the first time live, with Mantron, at the Voz do Operário, Lisbon. On November 7th they played at Johnny Guitar, Lisbon, and about a month later, with Massacre at the Pavilhão da Associação de Moradores de Sto Antonio dos Cavaleiros, Lisbon. Later the band enters Heaven Sound studios to record the track "Enemy" which would be integrated on the compilation "The Birth of a Tragedy" (MTM Records) released in 1992. August 1th 1992 they participated in the Tramagal Thrash´92, Abrantes, sharing the stage with Thornado and Afterdeath. In 1992, Carlos Pereira leaves the group to integrate Kossundolola (reggae band). Drummer João Silva stopped playing when the band has stopped its activities in November 1994. The group had a second phase during 1993-1994, after the departure of Carlos Pereira. At that time, are incorporated into the band guitarist João Paulo and bassist João Andre. In 1994 a 2 track demo ("Time Out " and "Endless Fall") is recorded at the STS Studios located in Sacavem, roduced by Paulo Soeiro. The band split up in November 1994. 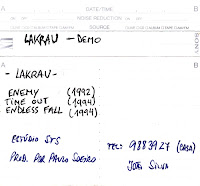