Formed around 1990, Shrine were a group from Linda-A-Velha, Lisbon. With Luís Simões guitar/ vocals, Eduardo V. guitar, Rogério Pinto drums and Antonio Cavacas bass the band recorded in January 1991 a promo-track "In Sheep´s Clothing". In 1992 after the split with their bass player António Cavacas, now reduced to a trio, Shrine enters the Edit studios They recorded in April a 2nd demo, composed of 3 songs "My Hatred", "The Mansory" and "Gnostic Ghost". October 31th 1992 they played at the Fogo No Gelo featival in Almeirim, with Sacred Sin and Dinosaur. Two months later in December 19th in Barreiro along with Thormenthor. In February 14th 1993 Shrine opened for German band Kreator at Armazem 22, Lisbon. In May 7th they played with W.C. Noise and Kradiolina Nicotine at the Juke Box, Lisbon. Shrine had some television exposure through the video clip of the song "The Masonry" and the shows continued through 1993, all over the country. They went to the Tcha Tcha Tcha studios in Miraflores and recorded some tracks, so they can show their work to the record labels. Shrine played at the 1st Black/ Death/ Grind Lisbon festival at the Pavilhão Carlos Lopes, January 15th 1994. Meanwhile Shrine signed a contract with Morgana Records. The fruit of that contract was the CD "Perspective". The CD presentation was at the Johnny Guitar in July 15th. Shrine released a 4 track demo in 1996, "Allright", "Anemone", "Naked Dagger" and "Bliss". A CD compilation featuring complete discography, was released through Chaosphere Recordings in 2013, entitled "1990-1996". 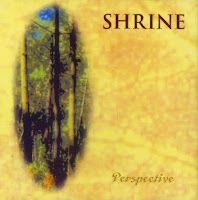 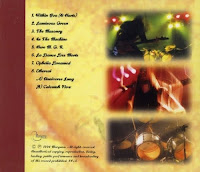 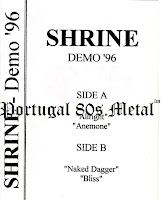