Espectros were originally from Odivelas, Lisbon, which appeared in 1979. In 1987 they changed their music style into a more Hard sound. The line up was formed by Rui Rodrigues vocals, Renato Ribeiro guitar, Tininho bass, Raimundo drums and Costa keyboards. Between June/ August 1987 they recorded in their rehearsal room into a 4-track Fostex, 2 tracks: "A Rainha de Blue Jeans" and "Miúda". Songs like "Concerto", "Manipulação", "Sonho" and "Sinistrado" were part of the band's repertoire. They played several concerts across the country, including opening for Xutos & Pontapés at the Pavilhão de Odivelas. 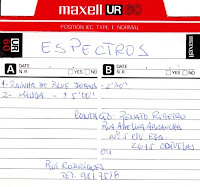