Satan`s Saints were from Amadora. Initially formed on October 1985 by Samuel Lopes bass, Zé Allen rhythm guitar and Carlos Coelho drums. After some searching for a vocalist capable of filling the place, they end up choosing Paulo Lemos. In mid-February 1986 João Carvalho enters for the second guitar. The group's first concert took place at the Ateneu Madre de Deus, Lisbon, June 26th 1986, with STS Paranoid. After a brief period of four months, they have the opportunity to to play at "Metal Stage", the 1st Heavy Metal Festival of Amadora city, an event that took place in the Plaza Cinema on October 4th. Also participated STS Paranoid, Cruise and Valium. In November the band went into studio to record their first demo tape. João Carvalho leaves but still in the same month his replacement is found, Mario Moutinho (ex.White Traffic, ex-STS Paranoid). In December 14th 1986 the band played live for the 1st time at the Rock Rendez Vous venue, with STS Paranoid, the very first organized gig by Metal Army. Meanwhile the group records at Edit Studios located in Amadora, a 5 track demo tape, with the songs "The Power Of The Night", "Nightbomber", "No Mercy", "Let Them Do It Again" and "Full Speed Ahead". Satan`s Saints were one of eight bands, together with Navan, Tarantula, STS Paranoid, Procyon, Blizzard, Devil Across and Black Cross, to entered the sessions for the first Heavy Metal double album, live at the Rock Rendez Vous in 1987, but that never materialized. Along with STS Paranoid and V12 they played in Nem Martins on August 15th 1987. After the departure of the singer Paulo de Lemos and bassist Samuel Lopes in the middle of 1987 the band separates. 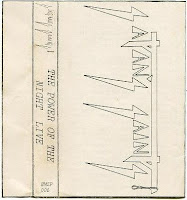