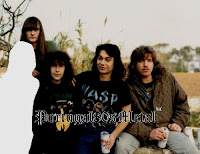 From Lisbon came Wild Shadow. The band was formed by three friends in the beginning of 1985, Paulo "Grande" drums, Aquiles "Quinito" rhythm guitar and José Gomes vocals. None of them learned to play with anyone... it was all by ear. Many bass and solo guitar players went through the line-up and many rehearsal rooms have been tried from Praça do Chile/ Penha de França to rooms in Olivais. In 1986 Paulo joins as bass player. In late 1986 with a stable line up and a regular rehearsal room/ studio (Hipolab) in Paço de Arcos, the quartet recorded their first demo tape, in just 4 tracks. The sound engineer was Paulo Godinho. However the sound was poor. The demo contained tracks as "Fight For Your Life", "Before The End", "Wild Shadow". The band continued to rehearse in this room/ studio and with this line-up. In late 1987 came to the group Lafayette as lead guitar. Finally in 1988, in the same rehearsal room/ studio, same sound engineer, with these line up Paulo, Aquiles, Zé, Paulo and Lafayette a 2nd demo was recorded. "Restless Run", "The Hope/ Sweet Desire", "New Order Merchants" and "Bound To Be Free" were part of the demo. These two demos were sent to only two or three publishers, but the band never got any response. They never sent to any zine and might have been made three or four recordings for close friends. Also they did a radio interview in 1988, at a Metal radio show in a pirate radio, Lisbon area. The problems in the band were diverse and in 1990 Zé Gomes leaves, almost one month before their 1st live performance, that would be at the Rock Rendez Vous on February 18th, opening for Alkateya. Zé Gomes as he was very friendly of João Henrique (ex-STS Paranoid) asked him to sing in is place. João did what he could do to learn the lyrics in three or four rehearsals and putting his own melodies, that improved in a more raw sound and melodic the songs. That same gig would be the last metallic session at the Rock Rendez Vous. After João Henrique leaving, bassist Paulo also abandoned the group. They were replaced by Gabriel "Gabi" vocals and Fernando bass. A 3rd demo was recorded in late 1991 with the five elements in a 24-track studio. The tracks were "Shadow Of Death", "Winds Of Freedom", "Bound To Be Free" and "Victim Of Society". The demo was sent to several publishers but again no response. João Carlos replaces Lafayette and they played for the last time at a band contest in Graça, Lisbon in 1992. At the end of the contest the unexpected happened, the band was disqualified for excessive ages. They decided to end in late 1993.


thanks to José Gomes 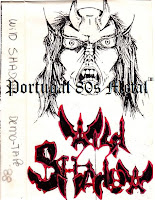