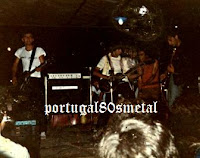 From the north of the country, more specifically Valadares, Vila Nova de Gaia came Mac Zac (pre-Tarantula). Formed in October 1st 1981 by the Barros brothers, Paulo lead guitar and Luís drums The line up was completed with Toni Ezequiel bass, Fernando Pereira rhythm guitar and João Campos vocals. The first live presentation was in Vila Franca de Xira, where they participated at the Grande Maratona do Rock Português (Great Marathon of the Portuguese Rock), along with Xeque Mate, Jarojupe, Bico d`Obra, NZZN, TNT among many others. The 3 days marathon was organized by the former newspaper Musicalíssimo, between December 18th and 20th 1981 at the Pavilhão do Cevadeiro. Thereafter the band began performing at the north of Portugal, and in one of those concerts were two German businessmen, who liked the band enough inviting them later that year to perform two concerts in Germany. So in the month of May 1982 they played in Frankfurt and Offenbach. The band took the opportunity to record a rehearsal in some studios in Germany. 45 minutes of music were recorded in just one take. From the 9 tracks included: "Mundo Imundo", "Fantasmas do Rock", "Junkie Sem Nota", "Força do Rock",  "Noite de Lua Cheia". Back to Portugal the band continued to perform at various secondary schools in the north. At the end of 1983, the guitarrist, bassist and vocalist left the band. The new bass player was recruited on the same year and the rest of the new members in February 1984. With this new line up and with songs such as "Metal Demons", "Breaking The Law", "Rock Fantasma" and "Fear" the band has played all over the country and in December 15th 1984 at the very first Portuguese Heavy Metal Festival. Organized by Purgatório do Heavy Metal Fan-Club, the event took place at the Pavilhão Associação de Moradores in St Antonio dos Cavaleiros, Loures (Lisbon area). The festival was a huge invent, they played with Xeque Mate, STS Paranoid, Valium, Sepulcro, Jarojupe. With this trip to the capital, the band gets a lot of fans, but at the beginning of 1985 the singer left the band. Then they recruited a keyboardist. Shortly after, with Carlos Meinedo vocals, Paulo Barros guitar, José Baltazar bass, Luís Barros drums and Paiva keyboards the band changed its name to Tarantula.