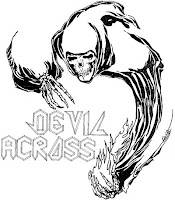 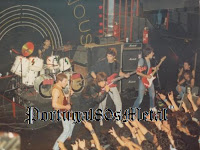 From Lisbon came Devil Across, formed in 1981 by guitarrists Ricardo "Bon" Santos and Fernando Pascoal Martins. In 1983 Pedro "Rato" Inglês drums joins the group and finally in early 1987 joins two new members, Pedro "Balto" Batalha bass and Carlos Ramalhete vocals. Songs like "Defenders Of The Metal", "King of The Bubbles", "Metal Attack", "You´ll Die", "Lisbon Night", "Love`s Curse", "Stand To Suffer", "Alju Battle", "Guards of Hell", "Rise" and "You`ve Got Love On Me" were part of the reportoire. Devil Across entered to a studio and recorded a demo in 1987. In April 3rd 1987 Devil Across played live for the 1st time, at Rock Rendez Vous, Lisbon. They were one of eight bands, together with Navan, Tarantula, STS Paranoid, Procyon, Blizzard, Satan`s Saints and Black Cross, to entered the sessions for the first Heavy Metal double album, live at the Rock Rendez Vous in 1987, but that never materialized. The live recording of the gig was in June 20th 1987. Balto leaves the group in 1988.