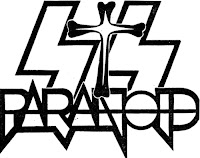 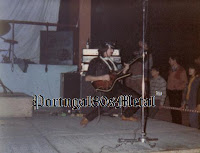 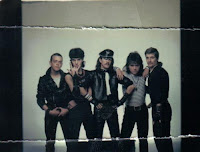 The group was born under the name of Atomic Mushrooms, but in 1984 they changed it to STS Paranoid. The first line up was Orlando Matias guitar, João Carlos Lopes bass, Tó-Zé Alho vocals, Joaquim Andrade drums and João Carlos Silva guitar. Later joins guitarrist Mário Moutinho (ex-Arcadia, RIP). By this time, the rehearsals were taking place in a mortuary house! The band played at the Rock Rendez Vous, May 12th 1984 and at the 1st Portuguese Heavy Metal festival, held in Sto António Dos Cavaleiros, December 15th, along with Mac Zac (pre-Tarantula), Xeque Mate, Valium, Sepulcro and Jarojupe. 1985 attends major changes within the band: Mário Moutinho and António Alho leave, being replaced respectively by Antonio Jose Solomão guitar (ex-Semaphore, ex-Tangier) and João Henriques vocals. They played at Rock Rendez Vous in May 12th and 13th 1985. Recorded a demo that came to figure in 8th place in the top of the "Luso Club" of Commercial Radio. The group will, however, over the years, temporarily switch to other members: Antonio Sanchez guitar, João Carlos Silva guitar (RIP) and Filipe drums (Mortifera, V12, Adelaide). And play live very often around the country. Some people refer to STS meant "Special Treatment Service Paranoid" but other sources support the thesis "Satan Take Our Souls". Their concerts were frequent sightings of the icons of hard rock's height (dungeons and skeletons). According to themselves, their music was based on anything that concerned them: Death, Satanism and the macabre in general. On October 4th 1986 STS played at the "Metal Stage" at the Cine Plaza in Amadora, along with Cruise, Valium and Satan's Saints. December 14th 1986 at Rock Rendez Vous with Satan`s Saints. They were also, in 1987, very close to incorporate in what would have been the first Heavy Metal double album released in this country. In a joint initiative of Rock Rendez Vous and Metal Army Fan-Club, were recorded in four live sessions designated "Metal Lusitano", June 13th 1987, with the participation of Black Cross, Tarantula, Procyon, Devil Across, Satan's Saints, Navan and Blizzard, but that never materialized. STS Paranoid ended in 1989, having been joined in 2007...