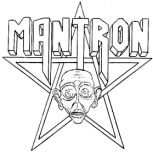 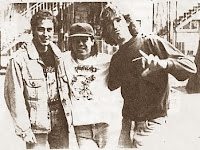 Mantron from Lisbon, was formed in June 1988, with the line up: Mário guitar, Klein drums, West bass/ vocals and Luís guitar. At the end of the year they recorded a demo tape entitled "Violent Thrashers", but the demo was never released, it was a preparation for a real demo. As a trio the group continues to rehearse and in the beginning of 1989 they perform live for the very first time, at the Secundary school in Sacavem, before 700 people. In March 1989 Luís decides to leave the band due to musical divergences. Mantron plays their 2nd gig, at the Bar Oceano in late May, along with N.A.M. and Cianeto. The band takes 2 months to record a 5 track demo tape, "Emperor`s Return". They decide not to sell it, but only to show to friends. In November 18th 1989 Mantron plays at the Clube Recreativo Leais Amigos, with Massacre and Massive Roar. At least 800 bangers attended to the concert.