Coming from Santa Maria de Portuzelo, Viana Do Castelo, Jarojupe are the two initials of each brother, Jaime Parente vocals/ drums, Rosa Parente bass, Juca Parente guitar and Pedro Parente guitar. Until then the band played at dance clubs, but to enter the contest Só-Rock, that took place in Coimbra in May 1981, was required 3 original songs, so they changed their musical direction to something heavier. The final of the contest was held on July 5th at the Estádio Municipal in Coimbra, having been ranked in 4th place. The following year they win the contest Grande Noite do Rock (Great Night of Rock) at the Pavilhão de Alvalade, Lisbon. As winners they never got to record the single promised. Jarojupe played for the first time outside Portugal, on March 23rd 1984, as guests at the Muestra de Pop, Rock y otros Rollos in Zaragoza, Spain. The band performed to around 15,000 people at the festival. In December 15th 1984 Jarojupe played at the very first Portuguese Heavy Metal Festival. Organized by Purgatório do Heavy Metal Fan-Club, the event took place at the Pavilhão Associação de Moradores in St Antonio dos Cavaleiros, Loures, Lisbon. The festival was a huge invent, along with Xeque Mate, STS Paranoid, Valium, Mac Zac, Sepulcro. The following year they released their first single "Pecado Mortal". The choice of the songs for the single were made by the label, and the recording was eventually made ​​in just 2 tracks. In 1986 a 5 track demo, tittled "Criatura Sinistra". Included the songs "Precisamos De Amor Esta Noite", "Alma Maldita", "Assassinos", "Criatura Sinistra" and "Pecado Mortal". Rosa Parente leaves the band and is replaced by Ronnie. The band had scheduled the first part of the concert of Iron Maiden/ Wasp, at the Dramático in Cascais, December 5th 1986, but for some reason they never got to play. According to what was said at the time, the reason was due to the extended time of the sound check that both Maiden and WASP had. Shortly after the group emigrated to Madrid, where they remained for a long period of four years, playing in bars and numerous concerts with Spanish bands such as Heroes del Silencio or Nacha Pop. Only in 1991 they return to Portugal where they launch their first album... Jarojupe are still active and releasing albums. 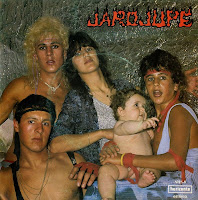 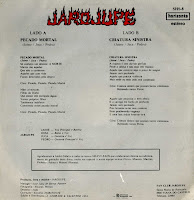 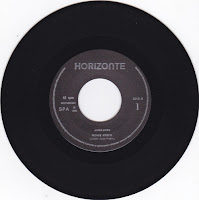