Lusitan Pride, recorded at the Orbitrónica studios in Lisbon, their only demo/ rehearsal cd-r in 1999. The demo includeded 9 songs: "The Watcher", "Queen of War", "Nightrunner", "Fear no Beast", "Visigoth", "Juçlgamento Final", "Metal Transfusion" and "Nightrunner (fast version)". Formed in 1997, in Lumiar, Lisbon by Luís Guerreiro vocals and guitar and Joey Capela bass (he had at the time a project called Navigator) and Pedro Bravo guitar (ex-ArmMaster) and who created created the band name, logo and the title Metal Nostrum. Dico drums (Paranóia, Dinosaur and Sacred Sin, as well music journalist/ writer) was invited in 1999 and stayed in the band for about six months. Luís Guerreiro emigrated to Brazil leaving Heavy Metal completely behind and became a Christian pastor, very well known in Brazil, before emigrating he was still vocalist of Fantasy Opus in their first demo cd in 2001.
thanks to Pedro Bravo
DISCOGRAPHY

ArmMaster was a group of friends who loved Heavy Metal from the Lisbon area in which they made some creative music and lyrics, about various themes, rehearsed in a now vanished studio near Praça do Chile. That lasted from 1986 to 1988.  They recorded some cassettes/rehearsals, Mike kept them and they never heard from him again (according to some sources he passed away). Some songs that were part of the band's repertoire: "Demoncracy", "Acrobats of Life", "Sign of Times" or "Arrested In Pieces". ArmMaster consisted of Pedro Bravo aka Peter the Cruel drums (Lusitan Pride), Priest Abel guitar, Satanic Mike vocals/ bass (Navan), Dark Beauty female voice and choirs and Jorge the Magician sound engineer.
thanks to Pedro Bravo

The group was born in October 1993 under the name Thorns. Its line-up consisted of Pedro Fialho vocals/guitar (ex-Bad Language and Decibel), Ricardo Rodrigues guitar (ex-Decibel Stream), Paulo Janeiro bass (ex-Decibel Stream) and Carlos Silva drums (ex-Caos Lentis). All the elements were from Almada, having their base in Costa da Caparica.

They made their live debut on June 22th 1994 at a party at the Monte da Caparica High School. In June/July of the same year they recorded two songs for promotional purposes: "Welcome To Your Doom" and "The Kingdom Beyond". These tracks were recorded at the STS studios in Sacavém, and the production and mixing was in charge of Paulo Martins and also from Thorns.
In September 1994 they were selected, along with 17 other bands, to participate in the 4th Portuguese Modern Music Contest in Alcobaça. Taking place in Bar Ben during the months of October, November and December they went to Alcobaça on November 4th, for the 1st eliminatory round, where they played with Exile and passed to the semi-final.

In that same month they were selected to participate in the Heavy Metal compilation, Rock Gar 94, produced by Gar studios, but the band refused the offer because they didn't agree with several items necessary for the participation in the compilation.
On December 9th of 1994 they returned to Alcobaça to participate in the semi-final, playing with Paranoia (from Leiria) and Misskiss (from Alverca). Paranoia were the winners and would later win the contest.
In December 1994 the band decides to change their name to Please Remember, due to the existence of a foreign group with the same name as Thorns.
On February 25th 1995 they play in Viseu, as part of the 1st meeting of Modern Music of Viseu, which takes place in Pavilion A, in the fairground of S. Mateus.

They played their 5th concert on March 3rd 1995, together with Blessesd Yarn at Lusitano Bar, in Cais do Sodré in Lisbon. On March 17th, they return to the stage, this time at the Casa Municipal da Juventude in Almada - Ponto de Encontro. Inserted on the 1st Almada Metal Fair, performing with Devileech and Funeral Party.  They take part in the "Quinzena da Juventude" of Almada where they play at Clube Recreativo Piadense. They play with Malevolence, Cruel Hate, Suicidal Archangel and Goblin at the Concurso de Musica Moderna de Paleão (Soure) on May 13th Please Remember go to the final along with Suicidal Archangel.
They are selected for another contest, this time the Cascais Rock/ 95, but they give up in the beginning of the concert, due to the organization not giving conditions for the band to perform.
They return to Paleão on June 3rd for the final of the contest. They get the 3rd place.
The group celebrate Portugal day, June 10th, playing with Misskiss and Cirrose Caótica in Valencia. Pombal (Leiria) receives them on June 24th, where they play at the River Bar, as part of the Pombal/95 Modern Music Festival.
Inserted in the two days of Spectrum Metal Festival that took place in Viseu, they play on June 30th with Losing Respect, Blasted Mechanism, Goblin Thormenthor and Shrine. With the entrance of the bass player for the obligatory military service in July 1995, the band decides to stop playing live and dedicate to the composition of new songs, having performed only a few concerts to test the new material. They return to Pombal on July 29th, where they perform at Discoteca D. Sebastião, with several bands including special guests Gang. Part of the final of Pombal Festival/ 95.
Being part of the compilation in CD of Musica Moderna Nova Independência, in October 5th, they enter again the studio. This time in Rock Studio- Pombal, and record the song "Evening Sky".

In February 1996 they enter in the JPN studios in Faro (Algarve), and prepare the recording and final mixes in November of the same year. Working with producer João Paulo Nunes (known for producing bands like Iris, Harum), Please Remember record 4 tracks: "Up There On The Moor", "Wish For An Answer", "Driven By Illusions" e "It's Snowing Outside". With the intention of getting a record deal.  The group return to the stage and plays at the Lemauto Pavilion, Cacilhas, on March 31th 1996 and again October 4th at the Locopinha disco, Praia de Pedrogão.

In December 1996 the only change in the group took place with Paulo Janeiro being asked to leave due to his lack of commitment. In comes Sergio Esteves (ex-After God), for the bass guitar. Please Remember played live for the last time on August 17th 1997 at the football stadium in Vila Nova de Milfontes. The band breaks up in 1998.
DISCOGRAPHY

promo tape "Up There On The Moor" ©1997 audio sample
MEMORABILIA

The first issue of the zine Resonancias came out in mid-1992, and a second issue at the end of the same year, in December.  The publication made by Carla and Sónia, was from the north of Portugal.

Fallacy formed in November 1994, with former members of Sacred Sin and the mythical Lakrau. The band consisted of João Alves vocals, João Paulo guitar, João André bass and Jorge Gonçalves drums.  With only a few months of existence Fallacy debut live at the I Metal Fair in Almada, together with Thormenthor. The acceptance was very good and the band was invited to join the list of bands that would perform at Quinzena da Juventude, in Almada, in March 1995, organized by the City Hall of that city. In that performance they played again with Thormenthor and also with Bizarra Locomotiva and

Silent Scream. In August 1995, Fallacy went into studio and recorded their debut album "Fallacy". It was at Boom Studios in Corroios and the songs were "Killer Race, "Godman", "Fifhty Hole" and "Blind in Grey". After the demo release, they gave a concert at Johnny Guitar bar. The band played live a few more times until the end of 1995, when vocalist João Alves left and was replaced by Ricardo Almeida. Already with the new line-up, Fallacy played at Instituto Superior Técnico in Lisbon and at the II Metal Fair in Almada, once again with Thormenthor and Extreme Unction. In April 1996 they play at the contest in Felgueiras, "Don't Stp le Metal". In 1997 they released a 4-track demo in CD-R and another demo in 2000, titled "Martirios".

The fanzine started in 1994 in Rio Tinto, directed by Antonio Pedro.

Eternal `zine Heavy Metal fanzine first came out in January 1994. The fanzine directed by João Nero, Antonio Aresta and Luis Carrega came from the South of the country, Beja. 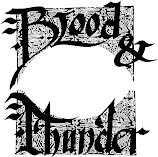 Blood & Thunder fanzine appeared in March 1993 in the Almada area. Ana Maria Pires was in charge of the project, which lasted until #7 in 1996. She was also manager of bands such as Bloodshed and Fallacy.

From Miratejo, Seixal, the band started their activities in July 1993 under the name of Mindsnare, but changed their name because there was already another band with the same name. After several line up changes, they performed live for the first time on March 4th 1994 in Feijó with Rebellion and Carnec. The second would be in Nisa, April 9, with Web, the third on April 22 at Bar Lusitano in Lisbon with Quandary and 605 Forte. In June they enter Boom Estúdios in Seixal and record their first demo tape, entitled "Endless Illusion", containing four songs: "Human Progress", "World of Hipocrisy", "Land, Country, Nation" and "Endless Illusion". Bloodshed play live a fourth time ,this time at Poço do Bispo, July 23, along with Imunity (who didn't play), Paranormal Waltz and Decayed. The line up consisted of Miguel Claro rhythm guitar, Ivan drums, Rui Neves bass, Miguel Fernandes lead/rhythm guitar and Zé Rodrigues vocals.