Unsilent was officially formed on January 1st 1990 in Algueirão, Mem Martins. The band completed the line up on May, consisting of Gonzo vocals, Mário Rodrigues "Stein" (ex-Extortion) lead guitar, Pedro Koko guitar, Marinho bass and Joe drums. After 11 months of rehearsals, they decided to record 4 songs that would result in the first demo. "Wearing Black" demo contained "Portrait Of a Loser", "No Aim In Life", "Blank of Emotions" and "Wearing Black". Recorded at Abrunheira Studios (the drummer Joe´s garage) in November 4th 1990. On February 2nd 1991 the band opened for Enforce at Clube Desportivo de Queluz and one month later on March 3rd in Odivelas with Afterdeath. 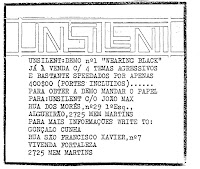