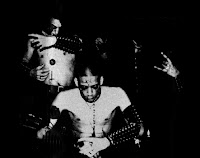 Dark/ Doom/ Black/ Death Metal band from Lisbon. All started with Pedro (Belathauzer) guitar/ vocals, Nuno drums and João Pedro (Tetragrammaton) bass (ex-Moonspell, Deepskin). With a more or less defined line up the band started rehearsing as a trio, and among several tracks, they recorded "Count Maggots" in a 4-track mixing. The track represented a kind of advance to the demo which was released after the departure of the drummer Nuno, being replaced by Jerzegemoth, Belathauzer´s brother. Their demo tape "The Miracle of Death" was released on July 26th 1991, recorded on a 4-track recorder at the Morbid God (pre-Moonspell) rehearsal place.The demo featured an intro "Slow Death", "Count Maggots" and "The Miracle of Death". Soon after Jerzegemoth leaves to Spain and Belathauzer then decides to change the band´s name to fit in the concept they adopted to follow. The result was Filli Nigrantium Infernalium.