All started in the city of Santarém, just as a solo project of guitarist José Gomes in 1991. In 1992 José Gomes dismisses the whole band and soon invites Luís Martins guitar/ vocals, Pedro Guedes bass and Nani drums. At the end of 1992 with the addition of a new vocalist Nelson Vigário, they recorded a 2 track demo tape at the Luís Martins home studio. The songs were "You're in The War" and "Olhos de Água" (sung in Portuguese). The group competes at various music competitions throughout the country (Fafe, Castelo de Paiva and Lisbon), having achieved good results in all of them as well as maturity. Faunnus opens for Tarântula in 1993, at the Gartejo, Lisbon. In late 1993, Nelson Vigário leaves the band for unsuitability, and then immediately Nani is dispensed. José Gomes is back to take the lead vocals. In January 1994 the promo "Manias" (still with Nani on drums) is released. In February the group played some gigs with a hired drummer, Gil Xavier. Gil joins definitely the line up. New songs like "Big Shit", "5 to 9", "Among The Apes" and the older "Louco Por Ti" were part of their reportoire. 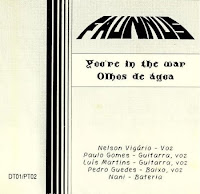