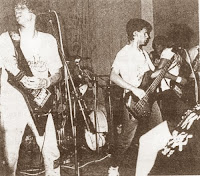 Necrophiliac from Queluz, started in late 1987 as a hard-core project named Distortion, but on April 1988 after a few line up changes and changing the musical direction to Speed/ Thrash Metal they renamed to Necrophiliac. Also in 1988 enters drummer Paulo Gomes and the vocalist Paulo, the line up was completed with Rui Dias guitar, Pedro bass and Artur dos Santos guitar. Their 1st live act was at Rock Rendez Vous venue on March 20th 1989, following in April 9th at the Bombeiros Voluntários in Queluz and at the Parque Central in Amadora, April 23rd with Mortífera. On May 22th along with Massacre and Mortífera they played in Massamá, at a time when the singer left the band, in this concert guitarist Rui Dias would ensure the vocals. After which Rui Neves takes the microphone. Shortly after bassist Pedro quit, coming to his place João. On January 7th 1990, with Massacre, they open for French band Agressor, at the Rock Rendez Vous. After the gig only Rui Dias remained in the band. With a new line up, consisting of Humberto drums, Pedro Oliveira bass and Rui Dias guitar, Necrophiliac would enter the studio to record their first demo tape.