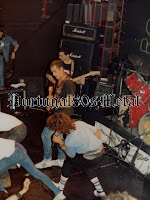 Navan came from Lisbon and was formed around 1985 by Carlos Foncy lead guitar and Rui Ross rhythm guitar and Lito drums. With several changes in the line up finally stabilizes with Mike Leviathan vocals, Guerin bass and Daniel Afonso drums. With songs like "The Will of The Wild", "Bloodsuckers", "Expressions" or "Fire Dance" Navan played their 1st gig, that took place at the Rock Rendez Vous venue, June 27th 1987. The gig was included in the fourth session for the first Heavy Metal double album, together with Tarantula, STS Paranoid, Procyon, Blizzard, Satan`s Saints, Devil Across and Black Cross. Unfortunately that never materialized. Mike is fired in the middle of 1987 and replaced by a new singer called Alho. The band changed name at the beginning of 1988 to Maelstron and replaced the bassist for Luis Costa. At this time the group was preparing to enter the studio to record some tracks.