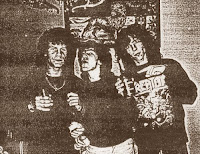 Thrash Metal band formed in 1988 in Lisbon. The line up was Miguel vocals, Carlos guitar, Artur guitar, Jorge bass and Diogo drums. After some rehearsals Carlos and Jorge leave the band and are recruited to Merciless Death in June 1989. In 1989 Carlos decides to join the band again. In 1990 a demo was to be released.