Around 1982, guitarist Carlos Jorge Miguel arrives in Portugal, coming from France. Country where he would play in several musical projects. Already here he ends up putting an ad in a music magazine of the time, and this is how he meets bassist Tó Andrade (formerly Go Graal Blues band). Soon in the first meeting between both there was immediately a great empathy and they decided to move forward with the project Vasco da Gama around October 1982.


Tó knew a very good drummer, Virgilio Marujo, who could not be available for professional reasons, joined the group four months after the band started. However, it is Orlando Levezinho who secures the drums during this period. The singer, Luis Sanches Casanova, also responded to this announcement although, at the time, he was undecided for being a heavy rock project.

After the first rehearsal, he stayed. After several rehearsals the invitation for the first live live concert would come from Pita (the man behind the sound desk of the famous venue Rock Rendez-Vous) and Zé Nabo (prestigious bass player and producer). And so on January 14th, 1983, they play at Rock Rendez-Vous, three months after the creation of the group. The band takes advantage of the occasion and invites a publisher to attend the concert, the label Discossette. That immediately shows interest in releasing VDG debut.


The  tracks were recorded between June and July 1983, produced by Carlos Jorge and Tó Andrade. Their only album would be released in the same year.
Vasco da Gama opened for British Heavy band Diamond Head on May 11th 1984 at the Pavilhão Os Belenenses, Lisbon. They also played several times at the Rock Rendez Vous, two of which in June 21th and 22th of the same year.
In April of 2019 it is reedited, for the first time, in CD by the label Carbono (Portugal), adding as bonus the first performance of the band at the Rock Rendez-Vous. Also on vinyl (without the bonus).


Sadly António "Tó" Andrade passed away on April 25th 2015, victim of prolonged illness. A great friend and extraordinary musician, you will never be forgotten. 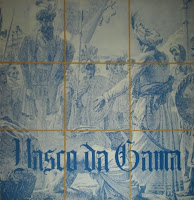 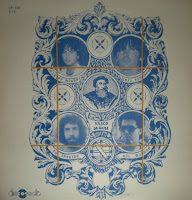 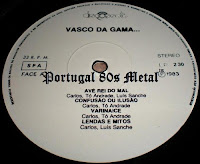 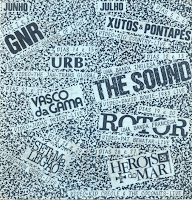