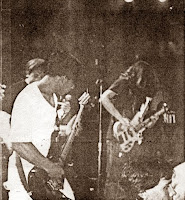 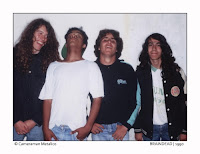 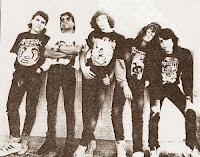 Braindead came from Almada on December 1987, by guitarrist Nobre and vocalist Michael. A few weeks later joins the group drummer Marco Franco. Only in April 1988 they found a bass player: Miguel Fonseca. Still in April they recorded their first demo tape, entitled "The Final Judgement", that included 4 tracks: "Trapped In Solitude (Intro)", "Warriors Of Pain", "Mortal Malignance" and "Bloody Nightmare". On June 9th 1988 they played their first gig at the Secondary School of Cacilhas, Almada, and their 2nd in July 1st, Fogueteiro at the "festivity of friendship". Finally in September they recorded their 2nd demo tape "The Human Remnants of..." which included 3 tracks "Winds Of Insanity (Intro)", "Hedonist Grimace" and "Peroxide". With this demo tape made ​​Braindead one of the most promising national bands. October 15th 1988, the group played with Procyon, Thormenthor and The Coven in Fogueteiro. April 1989 Michael and Marco leaved the band due to musical differences. But a few weeks later they returned, the line up was: Michael vocals, Marco drums, Nobre guitar, Vasco guitar and the new member Nuno Espírito Santo bass replacing Miguel Fonseca, who had joined Thormenthor. Numerous live concerts in 1989 and some at the Rock Rendez Vous venue. Already in 1990 drummer Marco leaves the band to join Massive Roar. The band splits and re unites without the original drummer in 1992 but changed their style to funk, rap/ Metal.