Hardness was born in the beginning of 1990 in Vermoim, Maia, Porto by Fernando Vilela guitar, Paulo Monteiro drums, Alberto Gomes bass/ vocals and Abel Duarte guitar. In June 1990 they played their first gig at the Lyceum in Maia. The band resolved to record their first demo tape titled "Thrashing Up...", between July/ August 1990 at the drummers garage/ rehearsal. The demo included one intro and 6 songs "Beirut", "Another Death To Die", "Acid Rain", "Bailinho Da Madeira", "Intro", "Silent Scream", "Unbeliveable War" and "Death of Destiny". In September 1st 1990 they played along with W.C. Noise at the Restauradores do Brás-Oleiro in Águas Santas, Maia. With the entry of Nuno Tavanez for the guitar and the passage of Abel for bass, frees Alberto to the vocals. In March 1992 they released their 2nd demo tape "Promo Tape 92" recorded at Rec n´Roll Studios, Valadares. 3 tracks demo "Euthanasia", "Remember When I Die" and "Face Death". The band opened for Brasilian group Sarcofago in December 12th 1992. And in 1993 a rehearsal tape is released with 8 songs, which included "Balada", "In My Eyes In My Mind", "Balada", "Reasons", "Elimination", "Over Me", "War In Hel" and "Cause i...". 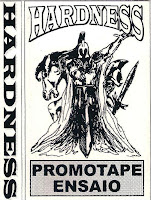