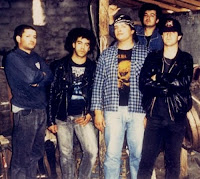 Cruel Hate were from Aveiro. Formed in November 1989 the line up was Paulo Pacheco and Rui D'Oliveira guitars, Carlos Bento vocals, Mário da Costa drums and Alberto Calé bass. In 1990, Cruel Hate make a self-made demo called "Imminent Destiny", but due to poor quality the band doesn´t released it. On July of 1991 the band played live for the first time at their home town. In March of 1992 the band recorded "Dying In Fear" at the professional studios Rec & Roll with the production of Luis Barros (Tarantula drummer). 5 songs were part of the demo: "War With No Pain", "Blindness", "Atomic Calamaty", "Times of Despair" and "Living In Fear". September 5th they played at Praia da Barra, Ílhavo. October 1992 they are invited to perform at the first Heavy Metal Festival Of Penafiel, along with W.C. Noise and Inkisição for 1200 fans. In 1993 the band decided to record another demo tape, a 4-track called "Beyond Beliefs". "Beyond Beliefs", "Tormented Cries", "Perpetual Riot" and "Condemned To Live" were produced again by Luis Barros at Rec & Roll studios.

"Self Introspection" live in Aveiro 1994 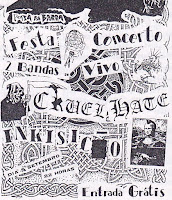