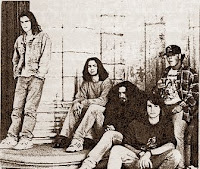 Formed around 1990 in Évora. The line-up was Nuno drums, Ivan bass, Henrique vocals, Fábio guitar and João guitar. In 1990 they played with Hellligion at the pools in Évora. 1992 the band recorded at Rec`n`Roll studios their 1st demo tape, with the tracks, "Perverted Mindloss", "Return From Emptiness", "Statement" and "Blue Chaos".