Procyon were from Almada, Lisbon. Formed in 1982 by João Vasco Marques guitar and Paulo McVictor bass. On December 1984 Mané Ribeiro drums and Tó-Zé Russo vocals (RIP 09.01.2013 victim of suicide) completed the first Procyon line up. Yet in December they played live for the first time, at the Secundary School of Pragal, Almada. The following year the group performed only two times, one in May to Cristianidad, in Costa da Caparica and  in July at the Festa da Amizade, in Laranjeiro. In late 1986 Tó-Zé is fired due to incompatibility and is replaced by Miguel Stein (RIP 2003, victim of car accident) in February 1987. Old songs are restructured, as "Deadly Sin", "Homicidal Husband" and "Megaforce Field". The great opportunity to play live at the famous Rock Rendez Vous venue was given by the Metal Army Fan-Club on March 8th 1987. Again in June 13th they returned to the same venue, for the live sessions for the 1st Heavy Metal double album, but unfortunately the album had never materialized. 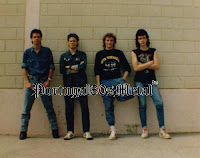 From November to December 1987 Procyon entered the Espírito Santo studios, located in Almada, in a total of 17 hours to record, mix and produce, their first demo tape titled "Obsessed By Time". The tape included 4 songs: "Obsessed By Time", "Claustrophobic", "Blessed By a Dead King" and "Ritual Of Agony". To promote the demo they performed live on December 20th at the Rock Rendez Vous. In June 5th 1988 they would returne to the RRV and in October 15th they headline the first Heavy Metal Festival in Fogueteiro, with Braindead and Thormenthor. In April 1989 they performanced three times: April 8th with German band Minotaur, at the Clube Oriental de Lisboa, Lisbon, in Almada and 29th in Almornos with Mortífera and Massacre who replaced Braindead, both gigs as headliners. A live demo was released, titled "Songs For Lunatics". The tape contained 3 live tracks recorded in different places, "Ritual of Agony", "Psicho Pain" and "Obsessed By Time". 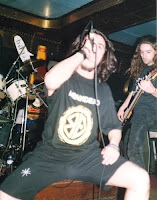 In mid-1989 Procyon invited the singer Miguel Stein to leave the group and the manager followed him. Before the end of the year, a new vocalist is found, named Nuno Torres (ex- Silent Scream) also a second guitarist named Jerónimo and a new manager, Duarte Dionísio. Between June and July 1990, is recorded a second demo, "Last Seeds Of Mind". Produced by João Martins at Estudios 35 in Almada. The demo contained 6 tracks: "Lab´s Entry", "Unspeakable Words", "Last Seeds Of Mind", "Asking More", "All The Same" and "Deadly Sin". During the recordings Jerónimo leaves the band, and is replaced by Carlos Mendes. Who only remained in that position long enough to participate in the recording of the video clip "Asking More". The demo was released in December 1990 and at the beginning of the following year (1991) the tour "Last Seeds On The Road" begins, with a number of concerts through out the country. On July 14th 1991 at the Barreirense Stadium, Barreiro in the "Diz Sim á Vida Festival", along with Afterdeath, Tarantula and many others, on August 17 as headliners at the 2nd Nazaré Metal Festival, Nazaré, followed gigs in Silves, Marinhais, Amora, Pataias, Barreiro and in January 17th 1992 as support act for Brasilian group Ratos De Porão, on their first visit to Portugal, at the Incrível Almadense, Almada. After this high point and promising career of the group, another major event affects the stability and evolution of the group, when two of the founding members, Vasco and Paulo, decided to leave the band. After several auditions, Daniel bass and Jorge Facas guitar joins Procyon. With the line-up consisting of Mané Ribeiro drums, Daniel bass, Jorge Facas guitar, Pedro Silva guitar and Nuno Torres vocals, new material is made, resulting in the 3 track CD EP "Read My Lips". Released in 1994 by Morgana Records, included the tracks "Read My Lips (I Won`t Lie)", "Wrong Song" and "Waterballgrey". With Ramp and Web the band played live in Porto at the secundary school Soares dos Reis. Procyon would performe their last concert in Santarém. During compositions, musical differences begin to divide the band and at the end of 1995 Procyon splits. 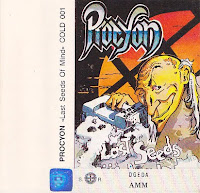 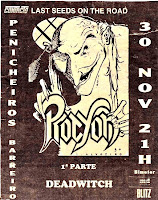