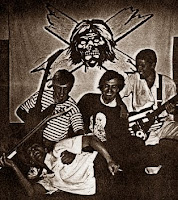 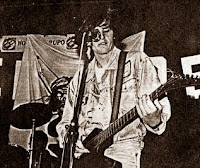 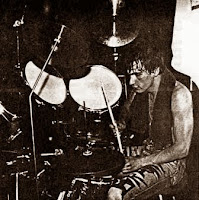 Formed in September 1986, in Porto city, by Jorge Santos bass and Pedro Santos drums, shortly after joins them João Leite lead guitar and Paulo Monteiro rhythm guitar, followed by the vocalist Carlos Roque. Carlos wa in the band between December 1986 to January 1987 and is then replaced by Paulo Cruz, who held the post between January to April. Follows a period of rehearsals until March 2th 1987 when the band performs live for the first time, in small party for 50 people, followed by another concert for some 70 people. Meantime, on June 7th 1987, they recorded a 3 track demo tape at Studios X, "Portas do Inferno" and "Praga Social". For the 3rd gig they played to about 300 people at the Águas Santas secundary school in June 13rd. The 4th time live took place in a band contest in Vila Nova de Foz Coa, September 8th. Follows a period of nearly four months of inactivity due to the lack of rehearsal room. Forced them to refuse some concerts, one of which would be in Lisbon at the Rock Rendez Vous. By this time songs like "Vaticinio", "A Ferro e Fogo", "A Ambição", "Fogo Cruzado" were part of their repertoire. In February 6th 1988 they played for about 100 headbangers in Senhora da Hora, Matosinhos. And in April 16th to about 300 Metal bangers at the (school) Escola Primária do Viso. The band entered the Pipermint Twist studios on July 16th 1988 to record their 2nd demo tape, which included re recording of two tracks from their first demo tape and two new songs. In August 26th they played at the Discoteca Tocata de Lordelo, Paredes opening for Iberia.