The band started out in the Summer of 1982, in Amadora, Lisbon, by the three Figueira brothers. The only line up that Valium had was Paulo Silva vocals, Jorge Figueira solo guitar, João Figueira rhythm guitar, José Figueira bass and Rui Pereira drums. They started playing hard rock with punk influences, but quickly switched to a more heavy sound. They sang in Portuguese since the beginning. The group participated in some of the most important events of Heavy Metal in Portugal. Acted on December 15th 1984 on the first ever Heavy Metal Festival in San Antonio dos Cavaleiros, and a few months later the band make their debut at the famous Rock Rendez Vous, included in one of the popular Heavy sessions "Falcão Metálico" (Metal Falcon). Time passed and the band's popularity was growing. The group managed to record several songs in a demo, at the beginning of 1986, "A Demanda" and "Por Ti" and in May another demo including "Crepúsculo (intro)", "A Noite" and "Pesadelo Real". On October 4th 1986 performed at the "Metal Stage", at the Cine Plaza in Amadora with Satan's Saints and STS Paranoid. Between December 1986 and January 1987 was the time of recording the song "Quem". Followed "Belo & Feio" in October and finally on April 1988 "Perfeição". Valium got the 2nd place in a music contest, which earned them a performance at the Dramatico de Cascais pavillion, in May 30th 1987. Valium played their last concert on July 30th 1988 in Damaia, Amadora, before changing name to Casablanca. 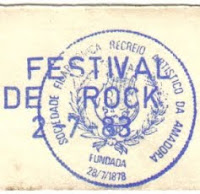 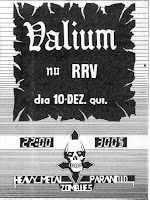