From Loures came Merciless Death. Formed in 1988 by drummer João Silva, Rui Kontacto guitar and Nuno vocals. After some time João Silva responds to an ad and is recruited by Massive Roar. But soon after he rejoins Merciless. By this time Jorge bass and Carlos guitar, both ex-Fallen Angel joins the team. As a quintet they began working on tracks already existed and gave their first concert in June 29th 1989 at Pingo Doce, Póvoa de Sto Adrião. together with Braindead. One week later they played at the Bar Oceano, along with NAM and Cianeto. October 14th with the punk band Dernier Cri. Then the group began to work on a more Thrash vein and leave their Hardcore stuff. Thats when Nuno quits, being replaced by Miguel. They return to  Bar Oceano, and after the gig João Silva announces that he will return to Massive Roar, but continuing in parallel with Merciless Death. Who do not like the idea is guitarist Kontacto who leaved the band. After some time of inactivity João Silva leaves Massive Roar to devote himself 100% to Merciless Death. Soon after Nuno joins the band as a second guitar. In June 1990 the group entered to the Musicorde Studios and recorded their demo tape. 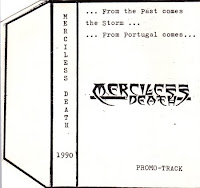 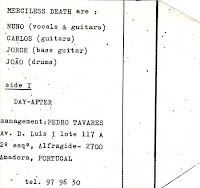 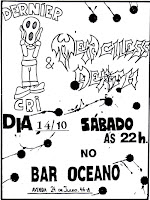