From the city of Faro, Algarve came Harum (Harum means Faro in Roman), that emerged in October 1989 by Gualter Fernandes guitar and João Mendes bass. To these join up later João Belo guitar, Rui Ponte vocals and Frick drums, that for lack of dedication is replaced by José Augusto. Their first gig takes place in Barracão in June 2th 1990. After a few shows the band recorded their first demo "Born in Hell", composed of 10 songs with a sound quality quite weak. After having been expelled from their rehearsal room the band gets into another one. Meanwhile they organized the concert "Mosh in Hell" in which a video would be made with the songs "Cemeteries", "Metal Boys" and "Self Destruction". In turn these three tracks were those that they would sent to some music contests, one in Lisbon and another in Loures (Lisbon area). Not being counted for Loures contest and know the clearance for the Lisbon contest, they began rehearsing hard all five songs that would make at Johnny Guitar, in May 4th 1991. Meanwhile they played some concerts, among which stands out the first part of the band Peste & Sida in Faro, for about 3,300 people, April 19th and in Loulé on the following week with Censurados. A few weeks later they went to Silves to play with Procyon, August 30th 1991. On December 7th they go to Alcobaça and played along with Exomortis and Tropa de Choque. Through more competitions and music concests the band enters the studio to record their second demo tape "Ticket To Hell". Which marks the debut of Cesário Gadelha, the singer who replaced Rui Ponte. In January 25th 1992 they begin their "Ticket To Hell Tour" and the song title of their demo is included on the compilation "The Birth of a Tragedy" on MTM Records. With some dates yet unfulfilled, Harum find themselves deprived of their vocalist Cesário and after two weeks also of their guitarrist João Belo. Cesário offered to guarantee all the dates of the tour until the entry of a new vocalist. During the third anniversary in Novemver 12th 1992, Nuno Fernandes joins the guitar spot, but the place of vocalist takes about a month to be filled. After listening to 15 singers, Cidália Salvador is chosen. Harum released in 1995 a self financed 8 track CD, "The Creation". The line up was Gualter Fernandes guitar, Nuno Fernandes guitar, José Lopes drums, João Mendes bass and Rui Santana vocals. 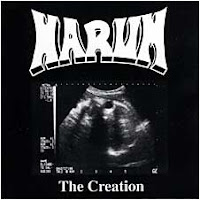