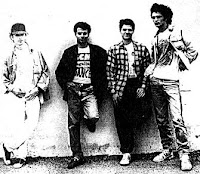 demo tape "Fragments Of A Future To Come" ©1992 audio sample