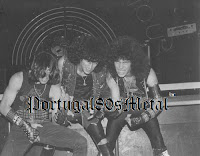 From Barreiro, Setúbal came Black Cross. Formed in 1985 by bass player João "Francês" Ramos (ex-Air Force) who contacted guitarrist Paulo Henrique to form a Heavy Metal band, Black Cross. João contacted another friend, Filipe "Bombas" who took the drums. After a period of several months with rehearsels and looking for a vocalist, Paulo Henrique leaves the band for personal reasons. Reduced to a duo the group continues rehearsing and by this time follows the acquisition of the new vocalist, Quim. The guitars are secured through the help of Toninho (Asgarth /Ibéria). On December 20th 1986 Black Cross played their first concert, at the Rock Rendez Vous venue. Soon after Quim quits the band and enters Ginha. With him, they try to record a demo tape, but that never happens. Ginha eventually leaves the band. They find a new replacement, Rui "Destruction" Subtil. They contact with Ronnie James Dio to collaborate in the project Hear n`Aid, Dio`s response to them was that he would gave all the support for organizing a concert featuring Portuguese Heavy Metal acts, whose funds would accrue to Hear n Aid project. In this context of euphoria they eventually recorded their 1st demo tape, with the tracks: "Genocidio", "Heavy Metal", "Sexta Feira 13", "Minotauro" and "Chamamento Para a Morte". In the beginning of 1987 the line up consisted in João "Francês" Ramos bass, Filipe "Bombas" drums, João "Relâmpago" solo guitar and Adalberto "X" vocals (performed only one gig with Black Cross). Soon after, Rui Subtil returns to the band. On March 20th they performed live at a festival organized by Radio Márgem Sul, before 1,500 people. The festival was broadcasted live on radio. Meanwhile the group is invited by RTP (National Television Channel) to record a short advertising spot against drugs, "Não! á dependência" (No to dependence). In March both guitarrists leave the band to pursue a solo career. Enters Rui Fingers (V12) and ensures all the guitars until the end of the band. Black Cross were one of eight bands, together with Tarantula, STS Paranoid, Procyon, Navan, Satan`s Saints, Devil Across and Blizzard, to enter the sessions for the first Heavy Metal double album, live at the Rock Rendez Vous, June 10th 1987, but that never materialized. During their performance in July 18th 1987 at the Ferroviários pavilion, Barreiro, singer Rui Subtil breaks a knee. Black Cross split up in the summer of 1987. The main reason came from the bassist João Ramos, who tired of the band's situation in the national metal scene, including the relationship with other bands, decided to leave the group, and consequently finished the project. The band farewell concert was in Vila Nova de Mil Fontes, July 31th 1987. 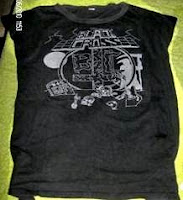