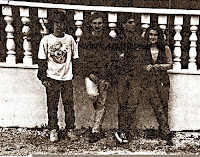 From Meirinhas, Pombal came Paranoia. The band took their first steps in 1990, with Luís Lacerda guitar/ vocals, Thierry guitar/ vocals, Silvia drums, Rui Capitão bass. And with that line up, they would play their first concert, at the Mercado Santana (Santana Market) in Leiria, end of 1990. In 1992 occurred the only change in the formation of the band, Rui is replaced by Fernando Silva. Paranoia often played live during this period, in the Leiria area, but also outside. A first demo is recorded in a home studio in the area. The 5 track tape contains the songs: "Intro", "Hard to Survive", "Better Than be Dead", "Death, We Can Still..." and "Orgasmatron" (Motorhead cover). The band share the stage with bands like Exomortis, Grog, Evisceration, The Gift, and many others. Probably the most emblematic gig was at the KDA discotheque in Alcobaça. In 1994 they participated and ended up winning the Contest of Modern Music at the Bar Ben in Alcobaça. A second demo is recorded and at the same time that it is finished around February 1995, the group ends. The reasons were related to the growing lack of availability of some members due to the fact that we are studying in different cities. And the demo was never released.
thanks to Fernando Silva