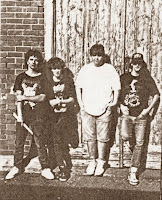 Silent Scream born in April 25th 1989 with Pedro Fernandes vocals, Patrick Elmer guitar, João A. Santos guitar, Claudio Cerejeira bass and Marco Cesario drums. This line up was at the time under the name Senativ, although they started working and made ​​a track, but lasted no more than a handful of months because in September 1989 Marco and Claudio leaved the band. For the place of bass player comes Pedro Quaresma, although it does not last long, as in January 1990 went Pita (ex-V.O.D.). At this time the band changed its name to Megalith. Three months later, Pedro and Patrick are working alone, starting everything from zero, making new songs and renewing old ones. When they had a series of tracks ready they started to looking for musicians. At this time the new elements were Jorge F. bass and Chico drums. In November 1990 Jorge F. leaves and Claudio Cerejeira rejoin the band, having already changed the group's name to Silent Scream. Rehearsals begin, the band takes more seriously the project but due to problems within the band, Chico leaves in March 1989 to enter Jorge Garcia. Zeto Feijão joined as a second guitar player. With this formation the first concert happened in high school Fernão Mendes Pinto, Pragal, Almada, on June 22th 1991. In September 1991 Zeto leaves to enter Jorge Fernandes. Due to a little misunderstanding with new guitarist Jorge Fernandes leaves and the band decides to stay with just one guitarist. Finally on the first week of January 1992 the band started recording their 1st demo tape on Heaven Sound Studios, which included the songs: "Intro", "Cruxifiction Death", "Death Escapes Like Blood" and "Fighting". After releasing the demo, the band played a concert at the secundary school St Andre, April 10th, Quinta da Lomba, Barreiro. Then, only on July 4th another gig, in Brandoa, Amadora opening for Afterdeath, Thornado and Insult. Just three weeks after the event another on, in Almada, these last two times with Zeto Feijão on guitar. A series of disagreements staterd within the band, culminating with the best concert of the band in the Johnny Guitar, Lisbon and the departure of Claudio. However the group did not stop working and then started to prepare their second demo, now with new bassist Rui Pita. In 1993 a promo with two songs is recorded, "Through My Mind" and "No More Silence", again at the Heaven Sound Studios, produced by João Martins...