From Barreiro came Helllegion, formed in 1988 by guitarrists Marcelo and João Lopes. Then joins João Augusto bass/ vocals. They experienced several drummers but can not get anyone. João in the meantime leaves the post of lead singer leading Marcelo to occupies it. In 1990 the drummer Paulo Silva joins the group. In April 1991 they recorded a 5 track demo with some old songs, in the rehearsal room, which was João Lopes bedroom. The demo titled "Ready For War... The Legion Arrives" included the tracks "Kill By War", "Curse Of All The Pharaos", "Human Jesus", "Power From Hell" and "Legion Arrives". The band played at the "Diz Sim á Vida" Festival in July 14th 1991 at the Barreirense Stadium, Barreiro. Helllegion recorded their second demo tape "Mortal Radiation" around 1993, with 2 tracks "Mortal Radiation" and "Auchwitz". On November 20th 1993 the band played at the Sto André Secundary School. 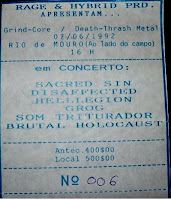