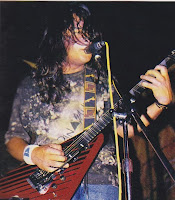 Band from Sta Iria de Azóia, Loures. Started with Tó vocals and Courela guitar in September 1989. Soon after Cordeiro joins as a drummer, however he had some difficultys to keep up with the band and was replaced by Orlando. But Orlando leaves soon cause he was also envolved with another band, Paulo joins. To the bass spot enters Rolando. On the 2nd guitar joins Rui but due to personal disagreements he was invited to leave. To replace him comes Mika. In March 1990 Dinosaur played for the first time live, in Sta Iria da Azóia. Soon after Paulo leaved and enters Diko. A little time after their 2ng gig at a school in Sacavém Dinosaur split up due to problems with the rehearsal room. All members started side projects, so in October 1990 Dinosaur re-start. In early 1991 came the opportunity to participate in the 1st contest of music at the Johnny Guitar venue. On January 1991 Dinosaur enters the STS Studios in Sacavém to record their first demo of 5 songs: "Intro", "Warfare", "Noise On Peace", "Mercenary", "Lonely Survive" and "Life Is For The Living (Instrumental)". At that time, Tó leaved the vocals and Courela starts to accumulate functions as vocalist and guitarist. On May 25th 1991 the band acts live at Johnny Guitar and were selected to the semi finals of the contest. In June 1991 they recorded three videos for the TV show Clip Club. The three songs chosen were "Warfare", "Noise On Peace" and "Life Is For The Living (Instrumental)". In August the band stopped their activities due to a surgical intervention that the drummer Dico has undergone (to the knee), which would delay the entire band's work in two months. The remaining members continued to compose new songs. In October 1991 they started rehearsing to record the second demo, however, some conflicts within the band does not allow the band to fulfill the deadline previously established. In March 7th 1992 Dinosaur participated at the Pernelhas Festival, this concert that would be quite controversial, since after 28 minutes of action someone from the audience climbed on stage and had a "spit" to one of the band members, after this unfortunate incident the band refused to continue their action. In April 4th 1992 they played at the 1st Metal Rock festival in Rio Maior. Some time after Dico leaves the band and to his place goes Paulo Alexandre. In July 1992 two new tracks are recorded, "Time Stand Still" and "Special Moments of Solitude" and again in September 1992 a 2 track promo tapewith two songs: "Accident" and "Special Moments of Solitude". In October 1992 the band participated with the track "Accident" to the double compilation LP "The Birth of a Tragedy" released by independent MTM Records. In 1993 Dinosaur released a 5 track demo which served as a presentation for an EP that would never be edited. The tracklist was "The River", "Make it Loud", "I Dont Mind (Bad Feelings)", "Special Moments of Solitude" and "The Blues". In May 1993, Mika and Paulo Alexandre leaved Dinosaur, to replace them enters Mário on guitar and Mário on Drums, and they played their last concert at the Loures popular party`s, August 1993. 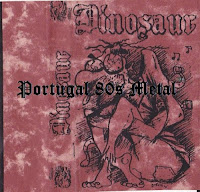