After releasing only one demo under Disembowel, Bruno Correia guitar/ vocals and João Marques drums decide to change the band's name to Bowelrot. With the addition of bass player Scott, the group released at least 4 demo tapes, until 1995, when they change their name again, to In The Umbra. 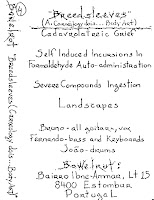